New restrictive measures for the period of quarantine were introduced in accordance with
Resolution of the Cabinet of Ministers of Ukraine no. 255 dated 2 April 2020 (officially
published on 4 April 2020).

New restrictions began to apply from 6 April 2020, and the main of them are:

Under  the new Resolution, it is prohibited to hold any public (cultural, entertainment, sporting, social, religious, advertising and other) events irrespective of the number of attendees, except for those needed for the functioning of state and municipal bodies, provided that the attendees are provided with face masks or respirators, and all sanitary and preventive anti-epidemic measures are followed.

What is a “public space”?

A definition of a “public space” may be found in the Law of Ukraine on Measures of Prevention and Reduction of Use of Tobacco Products and Their Harmful Influence on People’s Health, and it includes: government facilities, restaurants, healthcare facilities, educational institutions, children’s playgrounds, sports facilities, entrances to residential buildings, underground passages, elevators and public pay phones.

The definition of a “public space” was extended compared to the above definition, and in Kyiv it includes all parks, hydro parks, recreational areas, gardens, streets and squares, bicycle and pedestrian paths, beaches, and cemeteries (Source: the Restrictive measures for individuals to deal with the consequences of an emergency approved by the administrative order dated 4 April 2020 of the Head of the Emergency Response Works of the Kyiv State City Administration).

A violation of the quarantine rules may result in a fine of between UAH 17,000 and UAH 34,000 under Article 44-3 (violation of quarantine rules) of the Code of Ukraine on Administrative Offences. Besides, if the violation of the sanitary rules and regulations for the prevention of infectious diseases have caused or could have caused the spread of these diseases, a person may face criminal charges under Article 325 of the Criminal Code of Ukraine.

Please visit the Ukrainian government’s COVID-19 website for up-to-date information about the quarantine and restrictions  (information is available in Ukrainian and English) – https://covid19.com.ua/en

On 30 March 2020, during a special sitting, the Verkhovna Rada of Ukraine adopted the Law of Ukraine on Amending Certain Legislative Acts of Ukraine with a view to Extending Additional Social and Economic Guarantees in Connection with the Spread of the Coronavirus Disease (COVID-2019) (the “Law”).

The Law provides for quite a few changes in various areas of business activities.

The Law allows to hold a general meeting of shareholders not later than three months after the end of the quarantine.

Holding a general meeting of shareholders during the quarantine will not be considered as a violation of the Law.

In view of the above, JSCs must disclose annual accounts within five business days after the general meeting of shareholders.

The Law requires the Commission for the Securities and the Stock Market to draft and approve a temporary procedure for convocation and holding general meetings of shareholders remotely to come into force from the date of its official publication on the official website of the Commission.

Powers and authorities of supervisory board expiring in 2020 will automatically extend until the date of the general meeting of shareholders.

The Law amended the Civil Code of Ukraine, setting forth that from the date of establishment of the quarantine and until its end, tenants may be released from payment of rent if the property is not capable of being used due to the circumstances beyond their control. This, in particular, concerns restrictions upon or prohibitions of carrying out the activities, which the tenants were using the property for before the quarantine.

In order to support business, the Kyiv City Council adopted a decision on the 50% discount for small and medium sized businesses for payment of municipal property of the city of Kyiv. Such a discount will be in place from 11 March through 31 July and will apply to all tenants falling within these categories. If it is impossible to use the property, tenants are released from payments under lease agreements by paying a symbolic price of 1 hryvnia. These rules will also last through 31 July.

The Law also introduced the following amendments into labour laws.

1. Remote work (from home): It is now directly provided by the Labour Code. It is not required to amend the labour agreement in order to provide for the remote work. The order of the employer would be enough.

When working remotely (from home), employees decide when to work and are not covered by the internal working schedule; their salaries must be paid in full on the dates set forth by the employment contracts, unless a prior written agreement says otherwise.

Where there exists a threat of an epidemic, flexible working schedule may be introduced by
an order of the employer.

3. Down-time: The quarantine is recognized as the ground for declaring down-time. It can be applicable to all the employees of a company, to a particular department or even to one employee.

Down-time for the period of quarantine is paid in the amount of two thirds of the employee’s salary.

For the duration of the quarantine, the Law:

1) automatically extends the deadlines for appeal, as well as the procedural deadlines for consideration of civil, commercial and administrative cases;

2) grants the parties to civil, commercial and administrative cases with the right to participate in proceedings via videoconference, using their own technical devices, outside court rooms; a participant’s identity is to be identified with a digital signature or, if unavailable, in accordance with the procedure established by the Law of Ukraine on the Unified State Demographic Register and Documents Confirming the Citizenship of Ukraine, Identifying the Person or Confirming Their Special Status) or the State Judicial Administration;

3) grants courts with the right to restrict access to the hearing for nonparties, if their participation in a court hearing poses a threat to the life or health of a person (these changes, for some reason, apply to all types of judicial proceedings except administrative);

The Chief Scientific and Expert Department of the Verkhovna Rada of Ukraine expressed its doubts about the proposed rules, but the law was approved without discussion and without consideration of the Department’s opinions.

In the opinion of experts, the right of a court to restrict access to a hearing of nonparties in specified cases may be prone to abuse as the criteria for limiting visitors’ access to the court are not established.

The idea of participating in proceedings via videoconference mode is a positive development, although its implementation in practice will be problematic due to the absence of a Unified Judicial Information and Telecommunication System, which, according to the procedural rules, should be used for video conferencing. Using other video conferencing applications (Skype, Zoom, Google Hangouts Meet, etc.) is not prescribed by the procedural codes.

In general, the law will result in the suspension of most civil, commercial and administrative cases during quarantine, where at least one party has temporarily stopped its activities.

Last year, the Ukrainian Parliament introduced so-called ‘green actions’ with the aim of selecting the cheapest suppliers of green energy within the feed-in tariff quotas set out by the Cabinet of Ministers of Ukraine.

The law was approved with the view to balancing the market and producers who wanted a cut of the Ukrainian FIT.

More specifically, according to the law, first auctions were to start not later than April 1, 2020, on the basis of a decision of the Cabinet of Ministers setting the amount of the annual quotas and applicable schedule.

However, on April 1, 2020, the Guaranteed Purchaser informed the market about the postponement of green auctions for an indefinite period, since no quotas were actually approved by the Cabinet of Ministers for 2020.

The Guaranteed Purchaser also promised to announce the first auction as soon as practically possible, provided that the above-mentioned decision is issued by the Cabinet of Ministers.

Opening of the land market

On 31 March 2020, during the same special sitting, the Verkhovna Rada of Ukraine adopted Law of Ukraine on Amending Certain Legislative Acts of Ukraine with Respect to Circulation of Agricultural Land (the “Law”), which will come into effect on 1 July 2021.

On the same day, members of Parliament registered several draft resolutions that block the Law and purport to cancel the Parliament’s decision to adopt it. Besides, the Kyiv District Administrative Court received an application for interim measures in order to bar theSpeaker of the Verkhovna Rada from signing the Law. The court is reviewing legal grounds for that application. Therefore, until these resolutions have been considered, both the Speaker and the President are blocked from signing the Law.

Below are the main provisions of the Law opening the land market.

It is envisaged that foreigners will only be able to purchase agricultural land plots, if such a right is approved by a referendum.

Bank will only be able to acquire land only through enforcement against it as collateral under an unpaid loan. Such land plots will need to be sold within 2 years following the acquisition of the ownership right at land auctions.

Purchase of land plots under sale contracts is not allowed in the event of absence of documents confirming the original of monies or other assets at the expense of which they are being purchased. 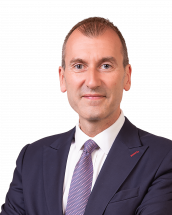